From left that’s St. Paul, St. John the Evangelist, St. Augustine and Mary Magdeline. I thought that this was also by Poussin because the ladies look the same to me. They probably also look like the “Sabines” and I’ll be going to look for copies of those pictures sometime soon too because they seem to apply to this situation that I’m in and I suspect that I guess that it must really come from that 1520-75 historical figure of Joseph “Lepanto” Nasi, that he got the ovaries for a girl and mass-reproduced this type of “product-people” that I and many others are from, and my part of this line of people is given to this cannibalism-world and its Armageddon-world-takeover old old demented child’s old idea.

This is usually said to be a medal of the “Woman Who Defied Kings,” Dona Gracia Mendez, but here it says that it’s more likely of her niece, this girl “La Chica.”

I think they took this girl’s ovaries and went into mass-reproduction under what’s now Istanbul, was Byzantium or Constantinople, keeping the “products” like this there: 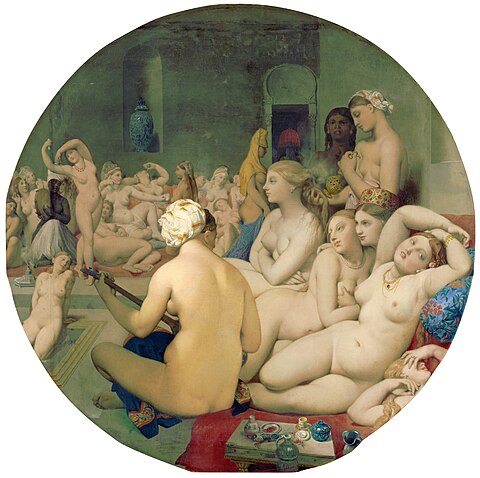 And the Battle of Lepanto. /en.wikipedia.org/wiki/Battle_of_Lepanto — The Wikipedia article doesn’t mention Joseph Nasi but as far as I know he’d invent/engineered the whole thing, the whole “fiasco,” disaster, filth.

(check, museum of the holy inquisition, in sicily.) With the Battle of Lepanto a key figure might be the pope called pius V, to be checked. It’s possible that after that stealing of the vatican that i figure had happened around the time just before 1492 or 1464, they’d set up their team with this one that played a major role in the battle of lepanto. it’s very likely that it was more the Consortium’s trying to get rid of the natives on Joseph Nasi’s “Ottoman” side of that and that he and the pope then were likely close relatives or similar, from a same spawn-group-set. I’m trying to get a look at a painting called The Miraculous Intervention of Saints Peter and Paul in the Battle of Lepanto, by Ottaviano Dandini and the terminal is asking me to prove that I’m not a robot and I’m sure that that’s because “my” parasites are antsy for me to get a break so they can get a break from staring at my head. In that way they keep the synapses to a minimum of activity for me too, with me just as an example of a human race person, etc., etc., that I’d prefer not to take a break because nothing ever gets done the way the system works except for their own wrong-headed evil. But Nasi is said to have done this Battle of Lepanto and I guess that the then-pope was someone of Nasi’s type or group probably, the usual working against the unawares normals then caught in the middle of the phony warring, is likely to have been one of the main things that that was about as these “Achean/Argives” from the “Trojan” invasion have gone around the world with this way of owning everything to themselves. I’m looking for examples of the involvement of spirit people in/around that Battle. Spirit people can’t tangibly reach and prevent you from hurting another mortal but nor can/could they just ignore all that horror, they can scream but it doesn’t make any noise unless you’re “sensitive” enough to pick up on the vibrations of the shock waves from themselves. Then it seems that Nasi’s type must have gone to war to get rid of all spirits because the Autists don’t like spirits, rid the earth of them by all this sadism. — They’re doing it again with the I’m not a robot thing. Once I start trying to comply with that they just keep doing it in circles till I give up and sign off. It’s time for me to try to take a look to see what the search-engine has got on that “Trojan” invasion of the Autist New World long-lost people. I think that the term “Trojan” really only comes from that someone, female probably, finally got exasperated and said that the Neanderthal buddy named “Jan” had to get out of the house, and it became a war because she “threw Jan” out of her house when the smiling Autists kept bringing the big guys along to also get fed all the time, that eventually patience expires, and I’m sure that that had even finally happened with the dinosaurs, that one of them finally caught on and snorted when they saw the little humans attacking a baby or breaking an egg and the Autists started running and then declared war and kept strike-attacking.

They’re cutting me off again now, just as i’m trying to try something different. — It didn’t work. Regular pdf though: lettersonspanis01maisgoog, from archive.org.

from Wikipedia: Gracia Mendes Nasi (Gracia is Portuguese and Spanish for the HebrewHannah, which means Grace;[1] also known by her Christianized name Beatrice de Luna) 1510–1569 was one of the wealthiest Jewish women of RenaissanceEurope. She married Francisco Mendes/Benveniste. She was the aunt and business partner of Joao Micas (alias, Hebrew name Joseph Nasi), who became a prominent figure in the politics of the Ottoman Empire. She also developed an escape network that saved hundreds of Conversos from the Inquisition.[2]

check, myjewishlearning.com/article/dona-gracia-nasi/ looks good in explaining some of that mirky old and seemingly-made up business, friction between beatrice and brianda.

there’s said to be a little something maybe about Joseph Nasi in here maybe, 406 pages, from archive.org, hutchinsonsstory00londuoft-406pages.

I’m trying to check to see if there are connections between St. Augustine’s Pedro Menendez and this group, and also there’s a possibility that this type that looks like that painter of the Joan of Arc picture, Ingres, that that whole stereotype, might have come from a “cross” or hybrid or what between Dona Gracia and her nephew, who is said to have been large and had a black bushy beard, but there weren’t any pictures of him.

This copy of the medal of Dona Gracia (the younger?) is from the 2002 book on all this, “The Woman Who Defied Kings,” by Andree Aeolian Brooks. I think that posting it is simply “Fair Use” of published materials, but there’s a picture of Duke Ercole of Ferrara that goes with it, and then the next page is this peculiar bit that I think is connected to ovary-begetting.

This copy of the medal of Dona Gracia (the younger?) is from the 2002 book on all this, “The Woman Who Defied Kings,” by Andree Aeolian Brooks. I think that posting it is simply “Fair Use” of published materials, but there’s a picture of Duke Ercole of Ferrara that goes with it, and then the next page is this peculiar bit that I think is connected to ovary-begetting.This is more or less the same pattern as the “Briseis” taking females for slavery and I think that if this girl isn’t exactly from the Briseis line of people then it’s the same pattern used on her and that I’m descended maybe more specifically from her. It’s said to be a medal made of Dona Gracia but I think it’s of her daughter or niece. Then a horrifying thought occurred to me that maybe the female-parent I’d gotten is also from one of these Nasi-owned “lines” or genotypes of people, because they seem to be using quite a few of them in this “Armageddon Program” or what goes on underneath wherever I go all these decades. For instance, that that line of people doesn’t particularly like my line of people is traditional, so in this “Program” they have the whole fraud-family of stereotypes like arguing about me as like a comedy-entertainment. Trying to get myself out of this. I just checked the email and there’s still not a response to the last time, just last week or the weekend before, the Saturday before last, I’d mailed for some more of the Florence Sabin letters. It’s like my only bright spot to get a few more of those and make some progress toward this larger picture of how this relatively-small conspiracy has taken over the planet earth by rigging up this “cannibalism-monopoly” to try to describe what we’re all stranded in now. Then the predominant factor is probably even moreso the serotonin that they get as the byproduct of the cannibalism, and the other things made with brain chemicals, but I think serotonin is the favorite, would guess that, that “LSD” is preferable to the speed or other types of highs. I hope tomorrow isn’t (messed up = a phrase I try to avoid,) a bad day.

I’m going to have to try to make a MENU Category called “Joseph “Lepanto” Nasi,” because that’s possibly such a huge subject to all this extinction-direction. Everything is difficult, there is very little information on this figure and I can never guess what is and isn’t part of the worldwide-Hoax on everyone and-or specifically me. Lepanto was a big failure-sea battle, around Greece around 1570. I think it was that the Nasi side sneak-attacked by jumping into other people’s boats and stole them but there’s no real telling what is what historically for little me here alone with everything at the same time and just in a vacuum. I’ll put here the few bits and pieces I’ve got and I’ll try to get to the library branch that has the main book on Nasi. There are 2 books on this guy and I don’t know if he was really real, but if he was it’s likely half of the whole global-system now at least.

From the 2002 book by Andree Aeolian Brooks, “The Woman Who Defied Kings,” about Nasi’s aunt and then himself also in there.

This is usually said to be a medal of the “Woman Who Defied Kings,” Dona Gracia Mendez, but here it says that it’s more likely of her niece, this girl “La Chica.”

The book was published in 2002 and I worry about taking anything too seriously, that it might have been misleading propaganda, but I kind of worry that that “La Chica” was one of my ancestors and had her ovaries sneaked from her by that crew. Have to sign off now.