Amazon-area autists; probably from Noel Chagnon’s study of the Yanamamo people of the Amazon, circa 1970s.

I’m going to try to focus on the subject of Autists in general but its increasingly clear since I got this smartphone that the computer field specifically belongs to the Autists’-system, like coffee and public housing and schools and medicine and the legal and business fields, all “generational-slave” set up for them, as with what I’m finding out about Alexander Graham Bell. Then there’s a Portuguese connection too, with the Brazil business. That goes back to that 1492 Line of Demarcation, then that Treaty I forget the name of right now; then the Zaragoza Treaty to similarly divide-up Asia.

I think the book of Revelation was actually authored by this anonymous model. The saint is actually the girl whose skull is inside the reliquary-statue. It’s very murky. I suspect some of the confusion is that alot of historical things were re-enacted so that they seem to have happened twice with the details mixed. I think that the “Pilgrims” in that Ghent Altarpiece lower right-side panel were headed to go on pilgrimage and had gone to this Conques town via that young “Pilgrim’s” directing the large figure in the red cloak.

(They were giving “pills” to “grim” people but the people were grim because food was starting to run short because of the “accidentally” extincted dinosaurs the ancestors had extincted.)

I think that that boy under and to the right of the blue shell symbol I’d put on there because it was the souvenir-logo for the Compostela de Santiago pilgrimage and that one guy is wearing one on his hat just to the left of the odd-different young boy, I think that that boy is misleading the red-cloaked figure and eventually became the model for that “Sainte Foy” reliquary, maybe a generation or 2 later, but that the Ghent Altarpiece and the business of whatever went on at Conques are related and related to all this about my being stranded alone like this at the bottom of how they’re pulling off those book of Revelation threat-promises to take over the world and wipe away the tears– but the big figure didn’t understand about this invisible old brain damage that that young boy had congenitally inherited, that I call Autism-psychopathy. Then they went to Conques and — but doesn’t the Ghent Altarpiece show that they already were doing the people-mass-reproducing? I think that comes from their leaving from King Casimir’s Wawel Castle in Krakow, headed out then to Ghent and to walk on into Western Europe, doing that cliff-pushing I’d guess because that was probably the whole thing about the Compostela de Santiago is that that La Finistre/Finestre is right behind there, the cliffs to the Atlantic, and then what was Botticelli doing out there with that Birth of Venus? Just because she’s on a scallop shell like the shell-shell (Shell-shell,) I equate that with that seacoast.

What I’m trying to get at with this file is that the Autists wake up and sit down and figure out how to get high each day, that they don’t do normal-people activities like supporting regular-birth children of their own, they get up and get high and watch from the underground for who to kill, and that’s all that they do, every day all of them. Then I’m up here and I wake into their plans for using me for each day for how they’re going to catch victims for supporting their lifestyle.

A Fool and His Money, by Ann Wroe

detail, “Two Tax Gatherers,” Dutch painter, Marinus Raeymerswahl or some such that I can’t read right now, close to that spelling.

prince of the autists = sideways pdf

I cannot be positive about this guy from this photo but his youth pictures and in Palestine look like this same “Wehrmacht” type:

I’ll try to get back and clean this up tomorrow, just the one photo is there and the rest extra as he’s a big subject with me. I haven’t yet seen that film they made, but I’m pretty sure he’d used substitutes for himself after he’d come to the states and there’s no telling which one was really the Mendelsohn from Berlin and before. This one looks alot like fertilization might have been from the rocket scientist Tsiolkovsky.

I’m looking for a color copy of the dancing pose that was made after this watercolor by Karl Bodmer, in the Omaha Joslyn Art Museum on (permanent) loan from InterNorth, thinking how to describe everything in one of these letters but to this new President-elect, but I got off onto this about the Hudson Bay then and then into that there’s only a little time till the snow keeps it impossible to get to any library or whatever horrors, and it’s always that one subject leads to another, that I’m swamped trying to get done right now. This Pehriska-Ruhpa might have been the ancestor of Hugh Hefner, for instance, is what I’m busy trying to do and it’s led right smack back to Lenny Bruce and my “French Connection” problem, that “Bruce” had spent some time in Marseilles, and I think that really was him in that picture with that fraud-parent, etc. kfoshay

King Rene; the Autist is on the far right, of this standard trio of system-types, same as in the Leo X and the 2 Cardinals painting by Raphael.

The “high-functioning Autist-psychopath” is in the lower-right corner with a headband that says “Avarice” on it in Italian, Avaricia I think it is. He’s carrying the “Joe Fuca” maybe I should try to make a label for the stereotype, the Buddy Hackett stereo-kind type maybe, and helped carrying him by then this, King David/Mabel Bell/Cardinal Rossi from the Raphael of Leo X, type. The girl on the far-left is my “type.” Somehow this description that she’s chasing them doesn’t mention the massive raging fire on the left. Art criticism seems to always misrepresent what the pictures are actually all about, or regularly does tht. I didn’t even see how big that fire is until I was looking at it last night because the other big point about this old painting is that circle in the upper-right with the 3 spirit-people in it. Spirits were dying off because they couldn’t leave the Earth because there were all these emergencies, wars, from the Autists, invasions and rampaging anything they could get their hands on. The one in the lower-right is a regular figurehead for this.

I have to crop this, etc.

It’s from the Baburnama I think it’s called, like a memory of Babur of India and I don’t know about him but I’d had illustration/s of Genghis Khan with one of these “yoke” splints on, I don’t know if there’s another term for them, but it’s a good subject, just not a good-enough picture till I get it better. What I think had happened is that the Old World people couldn’t do much with the invader-Autists from the New World, no matter what they’d tried to do. — You know, Sean Barron has a bit in his memoir, There’s A Boy In Here, 1992, that does have a scene with a cast in it. That might be connected to this in that the brain has deep-buried memory-bits, like racial-memories too in a larger sense. I think these yokes were tried for arm or leg restraints because the Autists couldn’t be kept still, couldn’t be kept from throwing #2 onto people, etc. have to sign off.

There’s the Pilgrim, “Pill-grim” I guess, behind the narcotics industry, and the petroleum, and people-manufacturing, having everyone misled.

#94, painting, Reymerswaele, (illustration Autism-psychopathy type with buddy-type)   001.pdf, this is from Ann Wroe’s book, A Fool and His Money but it’s that it’s a good painting and the opposite of my being any fan of Ms. Wroe’s, the situation is so bad. I don’t know how people like her live with themselves, trying to dodge outright calling her an Autiste. Her worst book as far as I can tell so far is about the Iran-Contra business. Whatever else is so funny about the tricks on the unsuspecting “normal” people she had some cartoon about Reagan as though in that “Knute Rockne Story” film but saying the line of Where’s the rest of me?

Leo X et al_.pdf, (from the Jesus examples.pdf: ) I’m just starting to notice that the cardinal on the right, Rossi,  might be what became of the Jesus type or line of people, the Nazarene, etc. And these other examples had disappeared as I’m learning to work this blogsite yet: https://universerescuekathyfoshaywordpresscom.wordpress.com/2016/05/26/leo-x-et-al-3/ 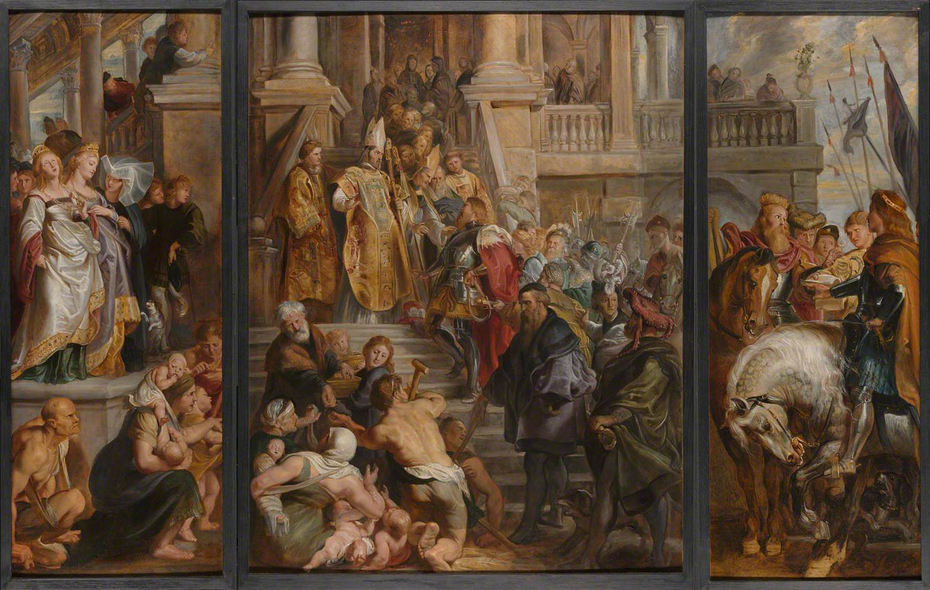 from Useum.org, St. Bavo sketch by Rubens, ck wikidata.org, St. Bavo enters the cathedral at Ghent, various titles this sketch for the finished 1-piece for the altar at St. Bavo Cathedral, Ghent, goes by. I’m only looking at the boy on the horse on this far right front; I think that that’s Dagobert.