the book is the u of chicago press, 1994, and they got it from baylor. i should make one photocopy but forgot to put the four pennies and fifteen cents for a copy of anything that might come up in my pocket, meaning that i’d have to work against the torture to try to find fifteen cents in my bag, if there is any, or either a dollar bill. I keep thinking that to try to write to that hachette press’s courtright about the other 3 books’ being like continuations of my french connection problem i should send a copy of tt photo with the envelope to help him recall that from early last year by.

200 Friedrichstrasse, berlin, check that “Houseball” in front of there 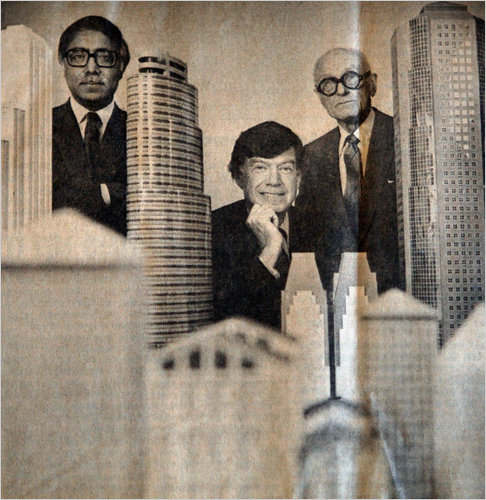 republicbank = ncnb center = b of a now i think, tt one i’d taken the photo of, points on top. they say it’s across from the penzoil building and 1985 transco tower he did, = another name for the williams building in the west.

ids center in minneapolis in 1973 = this is only a 2 minute walk from the w minneapolis — the foshay (sic) — chrome-coated reflective glass — ids had already had a design by edward frank baker, b. chicago 1926? d 2006, jewish, and now i’m reading it says the bldg was co-designed by johnson/burgee and first this guy, as opposed to schulze’s description but i can only skim books, and in 1973 it then surpassed the foshay tower as the tallest there, but it was baker’s design it seems that johnson and burgee worked with, maybe. here it says baker’s was 12 stories and johnson’s 57 then.

ck louis sullivan/his parents or such