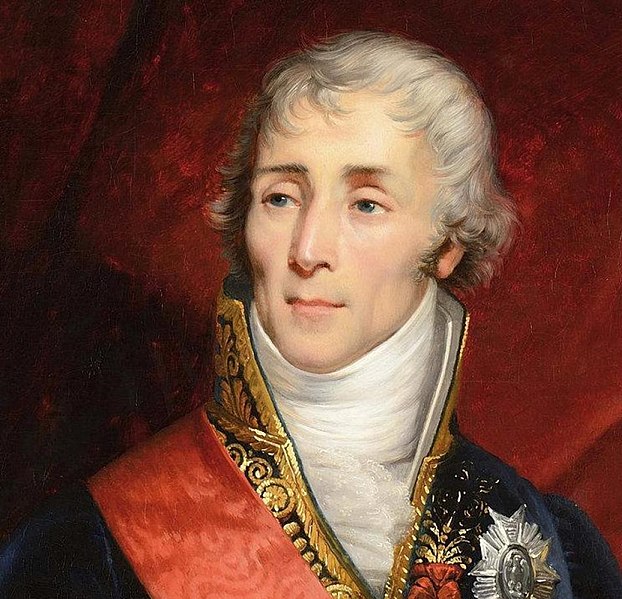 Portrait of Joseph Fouché, Duke of Otranto (1759-1820) first half of 19th century,  https ://www . welt . de/kultur/plus181564112/Biografie-eines-Umfallers-Was-will-Seehofer-denn-mit-diesem-Super-Ekel . html; source: Unknown, probably Marie-Therese de Noireterre 1760-1823, aka Madame Harriet, (see File :Eymar – Joseph Fouché ,  duc d’Otrante, né le 29 mai 1763 à Nantes . jpg) This is a faithful photographic reproduction of a two-dimensional, public domain work of art. The work of art itself is in the public domain for the following reason: The author died in 1864, so this work is in the public domain in its country of origin and other countries and areas where the copyright term is the author’s life plus 100 years or less.

This place Otranto that Napoleon made Fouche duke of is the heel of Italy, near Albania and thence Sicily too and has got an 8th duke d’Otranto from a line of people in Stockholm, that I’ll try to look into more about but this Fouche guy was the worst and is it my imagination of does he look a little like Mrs. Reagan…. I was just looking at the color photo of her when they were at the table with Marilyn Monroe in 1953 and hadn’t before noticed that her jaw was that long. What I mean is that my name might be pronounced like that Fouche monster’s, me and all that fraud-family from the Bronx, that 3 of the 4 “Watergate” -era brothers had been born by the time the Minneapolis scam-building had opened, a long-term Armageddon Plan this is, etc. I was looking at that photo of the 2 or 3 of them together (available for posting one of them for only nine dollars by the way,) for an example of the difference if he’d been married with Norma Jean/Marilyn. I couldn’t figure out what the big deal with keeping Nancy happy was till now this thought that maybe she was descended from the imprisoner Fouche.

Anyone who’s been following this (not any sarcasm intended,) would notice that I think Alexander Graham Bell was an insane descended-mass-reproduction of the him-kill-angels Buonarotti, Michelangelo, with his parent Melville Bell’s Visual Speech becoming these computers now and that the whole thing is bringing us to TOTAL PLANET EXTINCTION, and here Bell had known one of these Foshays. I don’t know anything about the one the junior high school in Los Angeles is named after, but here it says he was a or the superintendent of public schools. For not any known reason they’re saying my time is up on here now, sign off. — Back, now another difficulty, that it says James A. Foshay, 1856-1914, who maybe looks like Dostoevsky, was born in Cold Spring, NY, Putnam County, and I think that that’s where Rene Dubos had been living and thereby had had his first personal basement laboratory room. — Also, I don’t know who is doing this but I don’t “tag” anything whatsoever and don’t want any stranger-readers, you cannot assist me, you can only come to the notice of these parasite/insane monsters that leech-live all off of this longtime secret LURE off of myself, do not tag any of these “keywords” for that (expletive deleted) G***** search-engine, I’m afraid of that G*word of theirs, if it was a legitimate endeavor they’d’ve had it called Page-Brin search-engine. I just looked up that Foshay Tower and there are several image-links back to the “Limitless” footer without it’s really being connected to anything to do with the Foshay Tower and now I’m thinking that I should check what happens if you search for Oswald Avery or Rene Dubos:

digitalcommons . rockefeller . edu /life-of-rene-dubos/19/ — The Digital Commons Network brings together free, full-text scholarly articles from hundreds of universities and colleges worldwide. Curated by university librarians and their supporting institutions, the Network includes a growing collection of peer-reviewed journal articles, book chapters, dissertations, working papers, conference proceedings, and other original scholarly work. — I’m still so nervous about everything that I don’t know if I really can just download that photo of Dubos and Kenneth Goodner.

There’s also a portrait of Avery by Simone Lunetta, at RU courtesy of Ms. J. Einstein; but nothing linking back to here which is good except that those are the types of medically-interested people I might be able to get somewhere with if they’d start reading this that I’m stuck “emergency-compiling,” trying to. Really I’m stuck at trying to get a copy of the Palestrina mosaic, is what I should get back to, and then I’m waiting on responses to permission-requests, mainly from the one to Le Moyne College in Syracuse on that Otto III, like rushing from Rome to Krakow, somehow, and I’d then be trying to get details on the alleged route, as this system learned to find its way to and from and into everywhere. But back to Foshay I’m stuck with trying to follow on now. He went from Albany to the University of Southern California. Married to Phebe Miller Foshay, 1856-1948. Buried in Carmel, NY. — One image looks similar to Bailey, James Anthony Bailey of the Barnum Circus. James A. Foshay, 1848-1914  A nice photo from Wikipedia. — Also there’s foshaytech dot weebly dot com and foshay l c dot org.

I’d read Bell’s essay on that it would be good to have a deaf variety of people but couldn’t figure out what is so desirable about that, except that it’s one of the symptoms under the umbrella of “Autism” and he was pro-Autism. He and his father-in-law founded that National Geographic magazine and the month after Wallace’s passing they’d had an article I’ve got a first permission-request out on, am trying to get photos from their Oct. 2008 “Last of the Neanderthals” and, The Other Kind of Humans or other title it had also had, article, where the Neanderthal figure was nicknamed “Wilma” and I figure it was mostly all idea-of-reference to me being stuck in Washington like that.– When, in 1979, I’d been tricked into this Armageddon horror I’d stipulated that I wouldn’t or couldn’t have anything to do with decapitation, because that’s insanity that is beyond my coping abiltiy, I can’t do anything with that sort of a person that would do that, that that’s beyond insane, is beyond psychopathies for instance, is something I couldn’t get anywhere in trying to get that ‘straightened out.” And similar is the whole turning people into our hydrocarbons, into petroleum, that that’s an insanity like the decapitating.