[add Guglielmo Marconi and check his mother’s family in the Jameson whiskey bs; add that Edsel et al. are a small-sized guy without defense against these brain-eating monster “developmentally disableds'” system.]

— Probably my biggest point in wanting to get this picture of Edsel Ford to here is that that French curve drawing aide by his right hand there seems to me to be a “sign” that the guy was working on the space project, and then I think also the similar-type Frank Olson (allegedly passed 1953 in that MK-Ultra fall from the hotel window in NYC, etc., that that’s why I requested a copy of that recent or new Alan Glynn novel, Receptor, because that type seems like Olson and therefore Edsel also to my thinking,) might likely have been inducted for work on the space project also in those earlier years, that the system believed the heavens were full of gems and riches, maybe other people or foods and wanted whatever it was but they only want everything for themselves so the project and their beliefs were always kept hush-hush, and I think Rivera had put that French curve there as an indication that that’s what was on Edsel’s mind, and also that car in the background…. That looks like a Volkswagon “bug,” the German-made car, looks like Edsel’d invented it perhaps. He’d made a car for Rivera’s wife Frida Kahlo and I haven’t come across another single piece of information other than that she’d been presented with it. This portrait looks so nice above the help get me exorcised little next title that I think I’ll leave it like this for now. That thing in his left hand seems like a “sign” of some standard equipment that the brain-eaters happen to use. That’s the same thing as the “Limitless,” serotonin and then this “Receptor” book probably. I think it deals with that MK-Ultra business a bit. It’ll still be a week or 2 till it arrives. I have to sign out early all the time now because of that dogbite business, get to the room before it’s dark and there’d be not any witnesses or protection around again like that. The note here doesn’t really come right out and say it’s okay to use this photo but it seems okay:

= then there was attached what I think is the Mike Popso photograph I’d inquired about and I sent it to here and am adding this as my fair use and/or permissions okay. Previously written:

I can’t do much more about a Permission on this because I’m not in any shape to write to the Diego Rivera museum in Guanajuata yet and don’t believe they keep the copyright on this old gift anyway, etc:

[I’ll try to make a link for this picture of a c. 1956 maybe Edsel car’s front to a file on the Narmer Palette because the more I try to figure about this Mr. Ford’s “type” I’m thinking that they were in the position of being normals stuck with these brain-eating psychopaths and, like I do about the cannibalism, was perhaps trying to be normal and suggesting that the brain-eaters simply admit the truth and just be open about how they make their livings as the “narcotics” or brain-chemical distributors or “drug-pushers” or how they think of themselves as they try to get rich off of spreading their sales of other people’s brains and other body parts, etc. I think on this only because I can’t figure why the fraud-parent would have gone on about the Edsel’s being such a loser car to me who still doesn’t know one car from another, only those little Volkswagons are distinguishable to me and I’m even suspecting that it was Edsel who’d actually designed those. The car named after him was designed by a guy named Roy Brown, mentioned in the click-on to Mr. Ford’s file. — The grill/e doesn’t have the little upper “ears” that the Palette does but like I said, the more I think about it, it seems like that might have been Edsel’s “political” view, of just simplifying things by telling the truth.]

Manabezho Falls, upper peninsula of michigan, being a start, that I’m wondering if the name Detroit mightn’t have come from d’Etretat

(paleo-indian) people inhabited areas near Detroit as early as 11,000 years ago including the culture referred to as the Mound-builders.[13] In the 17th century, the region was inhabited by Huron, Odawa, Potawatomi and Iroquoispeoples.[14]

The city slopes gently from the northwest to southeast on a till plain composed largely of glacial and lake clay. The most notable topographical feature in the city is the Detroit Moraine, a broad clay ridge on which the older portions of Detroit and Windsor sit, rising approximately 62 feet (19 m) above the river at its highest point.[92] The highest elevation in the city is located directly north of Gorham Playground on the northwest side approximately three blocks south of 8 Mile Road, at a height of 675 to 680 feet (206 to 207 m).[93] Detroit’s lowest elevation is along the Detroit River, at a surface height of 572 feet (174 m).[94] 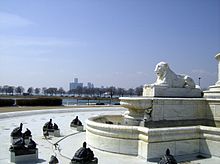 Belle Isle Park is a 982-acre (1.534 sq mi; 397 ha) island park in the Detroit River, between Detroit and Windsor, Ontario. It is connected to the mainland by the MacArthur Bridge in Detroit. Belle Isle Park contains such attractions as the James Scott Memorial Fountain, the Belle Isle Conservatory, the Detroit Yacht Club on an adjacent island, a half-mile (800 m) beach, a golf course, a nature center, monuments, and gardens. The city skyline may be viewed from the island.

Roy Brown was the car’s designer – I didn’t note which year he’d passed:

Brown was also the chief designer of the Cortina, and worked on the Thunderbird and Econoline van, as well as a concept car called the Lincoln Futura that reportedly became the inspiration for the Batmobile. And as Hemmings Daily’s Daniel Strohlpoints out in the lede of his obit, “in the long run, the failure of the Edsel actually proved a blessing to Ford: Out of its ashes came the Ford Falcon and Mercury Comet, and the lessons learned helped Ford successfully launch the Mustang.”

After graduating from the Detroit Art Academy at the age of 20 in 1937, Brown “was hired by GM legend Bill Mitchell for the Cadillac design studio,” Motor Trend’s Christian Seabaugh reports. “He left Cadillac to lead Oldsmobile’s design studio in 1941, before getting out of the business during World War II, when he served in the U.S. Army guarding Fort Knox.” He joined Ford after the war.

Brown died Feb. 24. A memorial service was conducted at First Presbyterian Church in Brighton, Mich., last week. Survivors include his wife of 42 years, Jeanne Feciashko Brown, and four children from his first marriage to Emily Roberts, which ended in divorce. His family has asked that donations be made to the national ms society. — She’s from brooklyn michigan.

English
Add a one-line explanation of what this file represents
clas dot berkeley dot edu /research/art-mutual-admiration-mutual-exploitation-rivera-ford-and-detroit-industry-murals
I found this on WikiArt’s copy of the ford by rivera portrait, but their copy is slightly cut off where that moon-shaped thing is:
Copyright Information Fair use rationale:

WikiArt.org allows unlimited copying, distributing and displaying of the images of public domain artworks solely. We use here Copyright term based on authors’ deaths according to U.S. Copyright Law, that is 70 years. In other countries, the duration of copyright term may differ. Please check here copyright length according to your country’s legislation before you consider reproducing images borrowed from Wikipaintings.org

Artworks protected by copyright are supposed to be used only for contemplation. Images of that type of artworks are prohibited for copying, printing, or any kind of reproducing and communicating to public since these activities may be considered copyright infringement.

this is a guy named mike popso that has a photo of the portrait: news dot 1xrun dot com/diego-rivera-frida-kahlo-detroit/ = try mike popso dot com

ck lord hastings worked as an asst., a young english or british aristocrat and artist

wsj dot com slash articles/SB10001424052748704875604575280872067321384 == good details, mentn of mantegna:  Only on the south wall’s lower right-hand corner is there a sense of brief respite from the factory’s energy, as we see Ford and Valentiner quietly contemplating, but not quite entering into, this massive busyness they have created.

Nativity-like composition; the infant’s face was modeled on the kidnapped Lindbergh baby, much in the news when the mural was painted == and I hadn’t put tt together…. == by tom l. freudenheim, 2010, writes about art for the wsj

this write-up says her bus accident had been in 1925

she was born 1907, that would make the accident when she was 18, and that that’s about what it had said in diego’s autobiography but i’d had the impression it’d been when she was younger, earlier than that

Close-up of the paper Valentiner(Kahn??i’d read somewhere also though) is holding says:

painted between July 25 . 1932 and March 13(.) 1933 while Doctor William R. Valentiner was illeg. ck illeg. of the Art Institute are the gift to the City of Detroit of (Mr.) Edsel B. Ford, President of the Art commission.

this was somehow on a cleveland dot com article but the article, like the one with the uncredited rabbi loew and the golem bright painting, didn’t have this illustration and now I’ve only got this as for trying to find this close-up again: