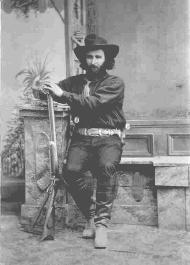 Ed Schieffelin was a prospector known to history as the “father of Tombstone.” In 1877, just prior to the discovery that led to the founding of Tombstone, Schieffelin established a “permanent camp” at Brunckow’s Cabin to be used as a base for exploring. With his brother, Al, and a fellow prospector named Richard Gird, Schieffelin searched the area for weeks, constantly on the lookout for hostile Apaches, but his stay was uneventful. There were, however, “several fresh graves” at Brunckow’s Cabin that served as “mute testimony to recent Apache raids.”[3][4][7]

In 1877, the city of Tombstone was founded by Ed Schieffelin. At the time, there was a scouting voyage in Tombstone against the Chiricahua Apaches. Ed was part of this mission and was staying at a place called Camp Huachuca. During his stay, he would leave the camp to look for rocks within the wilderness despite the fact that fellow soldiers at his camp warned him not to. ..

…When he returned four months later, Gird had lined up buyers for their interest in the Contention, which they sold for $10,000 to J.H. White and S. Denson, who represented W.D. Dean of San Francisco. The sellers thought the $10,000 price was exorbitant. The Grand Central and Contention claims turned out to be the richest claims in the district, producing millions of dollars in bullion.[17] The Schieffelin company also soon sold a half-interest in the Lucky Cuss, and the other half turned into a steady stream of money.

On March 13, 1879, Al and Ed Schieffelin sold their two-thirds interest in the Tombstone Mining and Milling Company, which owned the Tough Nut mine, for US$1 million each to the Corbin brothers (of Philadelphia,) Hamilton Distin of Philadelphia, and Simmons Squire of Boston.[18] Safford became president of the new Tombstone Gold and Silver Milling and Mining Company with Richard Gird as superintendent. Ed moved on, but Al remained in Tombstone for some time longer. Gird later sold off his one-third interest for US$1 million, doubling what the Schieffelins had been paid.[13][19]Gird remained in the territory but Ed Schieffelin left to pursue other interests.[13]

explore cochise dot com slash Ed-Schieffelin-Prospecting-Pays-off-in-Tombstone == Growth and advancing civilization made Ed Schieffelin uneasy. He yearned for the excitement of prospecting. In March of 1880, a syndicate paid the Schieffelins $600,000 for their shares in the Tombstone Gold and Silver Mill and Mining Company.

–april 24 1880, Engineering and Mining journal vol. 29, p. 285: sat, march 20th report that a few days ago a party of nyers and philadelphians passed through on their way from depositing a million dollars in a tucson bank to pay schieffelin brothers’ for the tombstone mill & mining company’s property

and Simmons & Squires, who are at present in boston

the mill couldn’t handle the rich supplies from their toughnut mill so they pooled their resources and acquire the 15-stamp Corbin Mill, the Tombstone Mill and the entire group of mines

the toughnut is in a lime formation near the porphyritic belt, is about 200 feet down in its nw,

In 1883, he returned to San Francisco, where he met Mrs. Mary E. Brown. They married the same year in La Junta, Colorado, and they spent part of the winter in Salt Lake City, Utah. In the spring of 1884, they returned to California, where Ed built a mansion for his wife across the bay from San Francisco in Alameda.[13][14] They bought a home in Los Angeles that they shared with Ed’s brother Al until Al died of consumption in 1885.

In 1897 Schieffelin bought a ranch near his brothers Effingham (Eff) and Jacob (Jay) outside Woodville, now Rogue River, Oregon. He continued prospecting in the Canyonville area, where he searched for gold and silver. On May 12, 1897, after he had not shown up in town for supplies for several days, his neighbor checked on him and found him face down on the floor of his miner’s cabin.[13]:24 The coroner ruled that he had died of a heart attack.[14] The ore samples found in his cabin were later reported to have assayed at more than $2,000 to the ton.[11] Other reports from his family said it was only valued at $7 per ton.[2] Schieffelin did not leave a map or directions behind pointing to the origins of his discovery.[11] He was initially buried near his cabin about 20 miles (32 km) east of Canyonville.

It was shortly afterward learned that he had requested to be buried in Tombstone. “It is my wish, if convenient, to be buried in the dress of a prospector, my old pick and canteen with me, on top of the granite hills, about three miles westerly from the City of Tombstone, Arizona, and that a monument, such as prospectors build when locating a mining claim, be built over my grave.” Schieffelin was interred about 3 miles (4.8 km) northwest of Tombstone, Arizona, near the dry wash in which he originally found silver ore and the later location of the Grand Central Mine. He was buried as his will specified: in mining clothes, with pick, shovel, and his old canteen.[11] He divided his estate between his wife and his brother Jay. “I give my wife, Mary E. Schieffelin, all interests, both real and personal properties—in Alameda and Santa Clara Counties, California—also fifteen $1,000 University of Arizona Bonds. All other properties, both real and personal, I give to my brother, Jay L. Schieffelin.”[14] Mary Schieffelin moved to New York City after her husband’s death.[23][25]