On May 18, 1926, McPherson disappeared from Ocean Park Beach, in Santa Monica, CA. Presuming she had drowned, searchers combed the beach and nearby area, but could not locate her body. Immediately, McPherson sightings occurred around the county, often in widely divergent locations many miles apart on the same day. The Angelus Temple received calls and letters claiming knowledge of McPherson, including demands for ransom. After several weeks of unpromising leads, Mildred Kennedy regarded the messages as hoaxes, believing her daughter dead.[109]

Just as the Angelus Temple was preparing for a service commemorating McPherson’s death, on June 23, Kennedy received a phone call from Douglas, Arizona. Her distraught daughter was alive resting in a Douglas hospital, and was relating her story to officials. 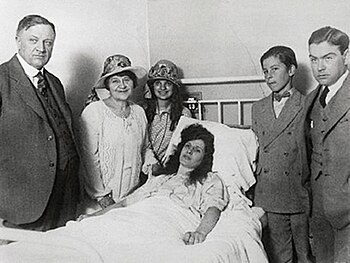 After emerging from the Mexican desert, McPherson convalesces in a hospital with her family in Douglas, Arizona, 1926. District Attorney Asa Keyes stands to the far left with Mildred Kennedy (mother) next to Roberta Star Semple, middle left (daughter). On the far right, Deputy District Attorney Joseph Ryan is alongside her son, Rolf McPherson.

McPherson stated, at the beach, she had been approached by a couple who wanted her to pray over their sick child. Walking with them to their car, she suddenly was shoved inside. A cloth laced with some type of drug was held against her face, causing her to pass out. Eventually, the revivalist was moved to a small shack in the Mexican desert. When her captors were away on errands, McPherson escaped out a window.[110]

She then traveled through the desert for around 11–13 hours across an estimated distance of 20 miles (32 km); and reached Agua Prieta, Sonora, a Mexican border town, at around 1:00 a.m. Collapsing exhausted near a house, the evangelist was finally taken by locals to adjacent Douglas.

The turnout at her return to Los Angeles was greeted by 30,000–50,000 people, more than for almost any other personage. The parade back to the temple elicited a greater turnout than President Woodrow Wilson’s 1919 visit to Los Angeles, attesting to her popularity and the growing influence of mass media entertainment.[111][112][113] Already incensed over McPherson’s influential public stance on evolution and the Bible, most of the Chamber of Commerce and some other civic leaders, together with many local churches, saw the event as unnecessarily gaudy display. To head off developing rumors that her disappearance was not the result of a kidnapping, McPherson, against the advice of her mother, who thought the press would continue to unfavorably exploit the story, presented her complaint in court.

While various speculations were proffered about the reason for McPherson’s disappearance, the Los Angeles prosecution settled on the contention McPherson ran off with a former employee, Kenneth Ormiston. She was accused of staying with him in a California seaside cottage he rented in a resort town prior to her May 18 disappearance. After leaving the cottage at the end of May, the pair traveled for the next three weeks and remained hidden. Then, around June 22, Ormiston drove McPherson to Mexico, dropping her off 3 miles outside of nearby Agua Prieta, where she walked the remaining distance and presented herself to a resident there.

McPherson maintained all along, without changing anything in her story, that she was taken, held captive by kidnappers, and escaped as she originally described. Defense witnesses corroborated her assertions [114][115][116][117] or McPherson herself demonstrated how the disputed parts of her story were plausible.[118]

Issues of trial by media and court of public opinion were apparent, as much of the proclaimed evidence against McPherson came from reporters who passed it on to police. Evidence and testimonies were hotly debated by an evenly divided public. The secrecy of California’s grand jury proceedings was ignored by both sides as the Los Angeles prosecution freely passed any new developments on to the press, while the evangelist used her radio station to broadcast her side of the story.[119] 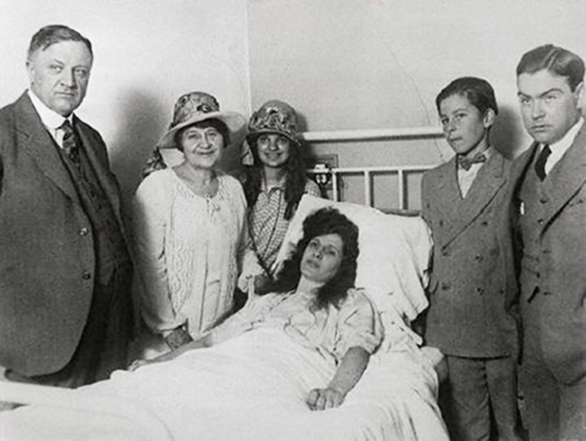 English
Add a one-line explanation of what this file represents

McPherson convalesces in a hospital with her family in Douglas, Arizona 1926, after stating she escaped from kidnappers through the Mexican desert. District attorney Asa Keyes stands to the far left with Mildred Kennedy (mother); next to Roberta Star Semple in the middle left (daughter). On the far right Deputy District Attorney Joseph Ryan is alongside her son, Rolf McPherson. The two Los Angeles officials immediately isolated McPherson from her visiting family as they dutifully extracted her side of the kidnapping story. For the rest of the year, as the grand jury prosecution witnesses later contradicted themselves or were otherwise discredited, McPherson’s story, though vigorously attacked from every angle, was the only story that did not change(Epstein, Sister Aimee; p. 313).