cards
between 666 and Aldous Huxley, for instance) or the magus’s aesthetic worldview (“the subject of a picture is

from the beast in Berlin, churton

After Humane Vitae, a shadow descended on the Montini papacy. In a series of foolish moves the pope and his financial advisers allowed themselves to become involved with some of the worst thieves and con men of the 20th century, with the Vatican bank being used as a conduit for dirty money. At the same time, the Lefebvrist schism was growing, many religious and priests left ministry, and disillusionment and a feeling

With the exception of the Papal States, the institution of the Inquisition was abolished in the early 19th century, after the Napoleonic Wars in Europe and the Spanish American wars of independence in the Americas. The institution survived as part of the Roman Curia, but in 1908 it was renamed the “Supreme Sacred Congregation of the Holy Office”. In 1965 it became the Congregation for the Doctrine of the Faith.[4]

malis committendis avocentur(translation: “… for punishment does not take place primarily and per se for the correction and good of the person punished, but for the public good in order that others may become terrified and weaned away from the evils they would commit”).[13]

the 12th century, to counter the spread of Catharism, prosecution of heretics became more frequent. The Church charged councils composed of bishops and archbishops with establishing inquisitions (the Episcopal Inquisition). The first Inquisition was temporarily established in Languedoc(south of France) in 1184. The murder of Pope Innocent’s papal legate Pierre de Castelnau in 1208 sparked the Albigensian Crusade (1209–1229). The Inquisition was permanently established in 1229, run largely by the Dominicans[18] in Rome and later at Carcassonne in Languedoc.

In 1468, James II of Cyprus of the house of Lusignan became King of Cyprus. In 1468 he chose Catherine Cornaro (born in Venice from the noble family of the “Corner”) as his wife and Queen consort of Cyprus. The King’s choice was extremely pleasing to the Republic of Venice, as it could henceforth secure the commercial rights and other privileges of Venice in Cyprus. They married in Venice on 30 July 1468 by proxy when she was 14 years old. 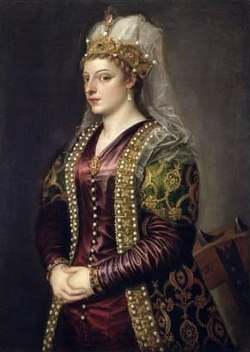 Portrait of Venetian Caterina Cornaro, the last medieval “Queen of Cyprus”, by Titian

Lusignan palace”, the Cathedral, the Square and the harbour.

In the summer of 1570, the Turks struck again, but this time with a full-scale invasion rather than a raid. About 60,000 troops, including cavalry and artillery, under the command of Lala Kara Mustafa Pasha landed unopposed near Limassol on July 2, 1570, and laid siege to Nicosia. The city fell on September 9, 1570; 20,000 Nicosians were put to death, and every church, public building, and palace was looted. Only women and boys who were captured to be sold as slaves were spared.[7][8] Word of the massacre spread, and a few days later Mustafa took Kyrenia without having to fire a shot. The Venetian walls of

However, Famagusta, strengthened by Cyprus’ governor Astorre Baglioni,[9]resisted with the Siege of Famagustaand put up a strong defense that lasted from September 1570 until August 1571.

On 15 September 1570 the Turkish cavalry appeared before the last Venetian stronghold in Cyprus, Famagusta. At this point already, overall Venetian losses (including the local population) were estimated by contemporaries at 56,000 killed or taken prisoner.[10] The Venetian defenders of Famagusta numbered about 8,500 men with 90 artillery pieces and were commanded by Marco Antonio Bragadin. They held out for 11 months against a force that came to number more than 200,000 men, with 145 guns,[11] providing the time needed by the Pope to cobble together an anti-Ottoman league from the reluctant Christian European states.[12]

The Turks lost some 52,000 men in five major assaults in early 1571, until in summer the Venetians, despairing to receive any rescue from the homeland and on request from the local starving civilians, decided to surrender. In July 1571 the Turks eventually breached the fortifications of Famagusta and their forces broke into the citadel, being repulsed only at the cost of heavy losses. With provisions and ammunition running out, his soldiers able to fight reduced to just seven hundred and no sign of relief from Venice, on August 1[13] Bragadin asked for terms of surrender. The Turkish commander, Lala Kara Mustafa Pasha, agreed to allow the survivors to safely return to Crete, but he did not keep his word: he was enraged because of his older son’s death attacking so few Venetian defenders. There followed a massacre of all Christians still in the city, with Bragadin himself most brutally abused.[citation needed]

From a military point of view, the besieged garrison’s perseverance required a massive effort by the Ottoman Turks, who were so heavily committed that they were unable to redeploy in time when the Holy Leaguebuilt up the fleet later victorious against the Muslim power at Lepanto: this was the legacy of Bragadin and his Venetians to Christianity, as Theodore Mommsen wrote. Historians[who?] to this day[when?] debate just why Venice did not send help to Bragadin from Souda, Crete. It is alleged that some Venetians thought about putting their limited military assets to better use in the forthcoming clash, already in sight, which would climax in the Battle of Lepanto.[citation needed]

The fall of Famagusta marked the beginning of the Ottoman period in Cyprus. It is noteworthy to pinpoint that this is the historical setting to Shakespeare‘s Othello, the play’s title character being the commander of the Venetian garrison defending Cyprus against the Ottomans.

After Cyprus was sold to the Republic of Venice, the castle’s square towers were replaced with circular ones to suit more modern artillery. After these modifications, a relief of the Lion of St Mark was engraved above the castle’s main entrance. The name of Captain Nicolo Foscari, who directed the alterations to the castle, and the date 1492 are inscribed near the relief. The castle gets its name from Shakespeare‘s famous play Othello, which is set in a harbour town in Cyprus.[1]

of the Archbishop of Nicosia. In 1191, Cyprus was taken by Richard the Lionheart during his campaign against the island’s ruler Isaac Komnenos of Cyprus. Richard subsequently sold the island to the Knights Templar who in turn sold it to Guy of Lusignan of the House of Lusignan after a revolt in Nicosia destroyed the Templar castle there. A period of peace ended with the death of Hugh I of Cyprus in 1218. A struggle over who should act as the kingdom’s regent ensued, pitting the House of Ibelin with the local supporters of Frederick II, Holy Roman Emperor. Frederick’s arrival in Limassol in 1228 escalated the conflict into an open war. In 1373, Cyprus was invaded by the Republic of Genoa which established a colony