1342, Amalric’s son, Guy de Lusignan, was elected as King of Armenia and took the name Constantine II. He was initially reluctant as the regent, Oshin of Corycos, was rumored to have poisoned the previous king, and killed Guy’s mother and two brothers. Under his leadership, the Lusignans tried to impose Western Catholicism and the European way of life on the Armenian people, who had a state religion of the Armenian Apostolic Church. The Armenian leadership largely accepted Catholicism, but the peasantry opposed the changes. Eventually, this led civil strife.[3] Constantine was killed in an uprising in 1344, and the throne passed out of the Lusignan family to his distant cousin Gosdantin; he reigned as Constantine III. Constantine III attempted to kill his cousins, in an attempt to eliminate all potential claimants, but they fled to Cyprus.

Main article: Alexandrian Crusade
Hugh IV de Lusignan became king at age 29, and unlike previous Lusignan monarchs he was content being just King of Cyprus, refusing his son Peter’s requests to lead a crusade for Jerusalem. He instead preferred to focus on issues in his realm and was strict on justice. When Peter and his third son John journeyed to Europe he had the man who helped them tortured and hanged, and sent ships to find and imprison his sons. He had a strong interest in art, literature and philosophy, hosting regular philosophical discussions at his summer villa in Lapithos and commissioned Genealogia deorum gentilium by the Italian writer Giovanni Boccaccio. In 1347 Prince Peter de Lusignan founded the Chivalric Order of the Sword, whose motto was Pour Lealte Maintenir the motto of his house.

In 1358 Hugh abdicated the throne, passing it on to his military minded son Peter instead of his grandson Hugh, the heir apparent. Peter believed that since Cyprus was the last Christian stronghold in the mideast it was his duty to fight the Muslims, and raided the coastal ports of the Asia Minor. The people of Korikos asked for protection from the Muslims. Peter sent his kinsman, Sir Roberto de Lusignan to lead the siege of Korikos. The Lusignans succeeded, and the various Muslim leaders united against Peter, launching an assault on Cyprus. Peter united Knights of Saint John from Rhodes, Papal armies, and Mediterranean pirates to defeat the Muslim fleets before they could land. After another defeat at Antalya the remaining emirs in the region offered him tribute, and he accepted, sending the flags, coats of arms, and other symbols of his house to be raised in different cities. Peter personally visited many of the cities he conquered, where he was given trophies, gifts, and was even worshiped by some.

When Peter returned to Cyprus he was in risk of losing his throne. Hugh, his nephew who had previously been the heir apparent, went to Pope Urban V in an attempt to be recognized as king. Peter journeyed to Avignon to present his case. Urban sided with Peter, but Hugh was given a high annual benefit as recompense. Peter also discussed another crusade with the pope, and then decided to visit the other kings and rulers of Europe to strengthen his army. He visited Germany, France, and England, where the famed “Banquet of the Five Kings” took place. In 1363 Peter attended the Congress of Kraków, hosted by King Casimir the Great of Poland. In attendance were Charles IV, Holy Roman Emperor, King Louis I of Hungary, the Valdemar IV of Denmark, and other lords and princes. Among the issues discussed were Peter’s crusade, peace treaties between the kings, and the succession for the Polish throne. While there Peter won a royal tournament, adding to his prestige. 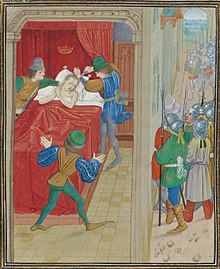 While Peter was attempting to launch another crusade and gaining recognition, his brother Prince Johnruled as vice-king in Cyprus and faced many challenges. There was an epidemic in 1363 which resulted in the death of many Cypriots, including their sister Eschiva. The Turks heard that the people of Cyprus were dying and took advantage by raiding and pillaging the villages. During this time there were also conflicts between the Genose navies docked at Famagusta and the native Cypriots. Peter was in Genoa at the time and negotiated peace. He failed to gain the support of the major rulers but set off on a crusade with what men he had. He sacked the city of Alexandria, but was prevented from moving on to Cairo, and succeeded only in angering the Sultan. Peter moved on to Beirut, Tripoli, and in 1368 attempted once again to unite Europe in a crusade. Pope Urban V instead had Peter make peace with the Sultan of Egypt, who was attacking Christian ships in retaliation for Peter’s crusade. The increased commerce under Peter’s reign led to Famagusta becoming one of the wealthiest cities of its time. It became renown as a place where the rich could live in lavish surroundings.

While on one of his visits to Rome Peter received word that the barons of Armenia wanted him as king. He returned to Cyprus to find that his queen had been unfaithful while he was away, and he tyrannized all nobles she showed favor to, including his brothers. In 1369 Peter was assassinated while in bed by three of his own knights. During his reign he was known as the epitome of chivalry, and was the greatest king of the Lusignan dynasty. He was succeeded by his 12-year-old son, Peter II.

Peter’s brother John served as regent for 12-year-old Peter II. John’s appointment was opposed by many, especially Peter’s wife Eleanor of Aragon, who suspected John of arranging the assassination. Vowing revenge, Eleanor asked for military aid from Europe in order to punish Peter I’s murderers. The Genoese agreed, and invaded in 1373, which led to them capturing Famagusta, the most important port in the region. Peter II recalled forces from cities along the Asian Minor to defend Cyprus, resulting in their loss. He signed a treaty with the Genoese, one of the conditions being that his uncle, James, the youngest brother of his father Peter I, be exiled from Cyprus. This ended the war, but James was captured by the Genoese in Rhodes and held captive in Genoa. After the war Eleanor finally killed Prince John, still under the belief he had murdered her husband. Peter II signed a peace treaty with the Sultan of Egypt, and died in 1382 at Nicosia.

The Parliament of Cyprus decided that James I of Cyprus was to succeed as the new king. Unfortunately James was still a captive of the Genoese. While in captivity he had wed Helvis of Brunswick-Grubenhagen and had 12 children. After agreeing to give the Genoese more rights in Cyprus, he was released. While he was away Cyprus was governed by a council of 12 nobles. Some of the nobles opposed his return, led by the brothers Perotte and Vilmonde de Montolivve, who wished to be kings themselves. In 1385 James returned again, and succeeded, being crowned in Nicosia. In 1388 he was crowned king of Jerusalem, and in 1393, following the death of his cousin Leon of Armenia, he was crowned king of Armenia. James died in 1398, and was succeeded by his son Janus. 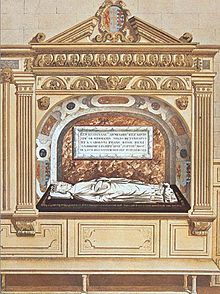 Tomb of Leo V, last king of Armenia, in the Couvent des Célestins, Paris. It was desecrated in the French

Famagusta for the Lusignans, and their blockade forced Charlotte to stay in the castle of Kyreniafor three years. In 1463 she and Louis fled Cyprus for Rome, where they were welcomed by Pope Pius II.

James was crowned king and married Catherine Cornaro in 1468 to establish an alliance with Venice. In 1472 Catherine arrived in Cyprus, and James died several months later under suspicious circumstances. Their son James III of Cyprus died at one year of age, bringing an end to the Lusignan kingdoms.

3/5/19 Tues., 930am, jew-“show” feeling in addition to the usual invisibles ble-tortures, like being woken that into a “holiday” LURE exhibition, on account of that it’s too cold to go out for the 2nd day in a row. “They’re” doing some premeditated something script, etc. Yesterday someone from the VA called, saying she was from some OEC””” department and had gotten a piece of mail addressed to me. She said she could re-direct it to 2A-112 and I thanked her but afterward wondered how she’d gotten the cellphone#. She said it’s from social security. I “wondered” if she was really for some LURE signal.
3/6/19, Wednesday 10:30p, out of nowhere the animals just cut off the search-engine. I’d looked up about the ygs group, the bonniers, and then checked wiki on some mundane subject and now settled down to check the ygs details and search-engine for the specific employee’s name and the thing wouldn’t produce anything, no weather either anymore again.
3.7, Thurs 1am now, these monsters, the shitcap on my (hologram) skull, LURE phrase incessant all day, me doing clotheswash seems lure-cpnnected now as the animals did a surprise pisspulling attack I just finished cjeaning up from and the animals are viciously sucking me and jew doing tt phrase.