3/13/19, Ms. Gray, I finally unearthed that this “Rocket Ship” exhibit was done by Raymond Loewy and wasn’t anything like described in this article or a 1938 one by Popular Science, had perhaps been the original hopes for the exhibit, but it became more of a planetarium experience: Previously I’d found this description by Mr. Loewy:

“I suggested to the Chrysler Corporation that it display an animated, realistic model of a rocket-launching spacecraft installation at the 1939 New York World’s Fair as an expression of the corporation’s long-range vision and technological leadership. It became one of the fair’s greatest attractions. Every twenty minutes a batch of visitors was admitted to a huge half-cylindrical area, in total darkness except for the spotlighted rocket on its launch pad installed in a shallow pit on one side of the space. The launch area showed all kinds of lights, white and colored, blinking and conveying a feeling of activity and suspense. A deep rhythmic sound, the whirling of powerful motors, compressors, and high-frequency sound waves made the whole area vibrate and pulse…. The rocket seemed to be made ready for lift-off and the audience was on edge. Then at the sound of sirens: Lift off! In a moment, a blinding flash of hundreds of strobe lights and the roar of compressed air suddenly released- the rocket, through optical illusion, seemed to disappear overhead in the blackness of space. Then total silence while a gradually diminishing point of light faded away to the stars…. People who saw it once often returned; it was a thrilling preview of what many believed could happen in the future. It did; only thirty years later.”

That’s what I think it turned out to be like but there is alot of confusion. The name of it was the Focal Exhibit, in the Chrysler Building. Salvador Dali had had a wild “Trip to Venus” girlie-live art big old strange building exhibit that might be confused with the above. I’m still checking on that but below is an idea of what I’m trying to put up, where my main point is the space-race, that the system-people all believed they’d find lots of things in outer space and were always trying to get money for their space venture, both here and in Russia at the same time, same global-system playing both ends against the middle sort of the standard operating modus operandi.

Wikipedia says this about his illustrations for another 1939 article, that: This work is in the public domain because it was published in the United States between 1924 and 1963 and although there may or may not have been a copyright notice, the copyright was not renewed. Unless its author has been dead for the required period, it is copyrighted in the countries or areas that do not apply the rule of the shorter term for US works, such as Canada (50 pma), Mainland China (50 pma, not Hong Kong or Macao), Germany (70 pma), Mexico (100 pma), Switzerland (70 pma), and other countries with individual treaties. See Commons:Hirtle chart for further explanation.

Excerpted from “World’s Fair Thrills;” pages 73-78, 242, March 1939 Popular Science article:  When the New York World’s Fair opens its gates, a few weeks hence, its exhibits of art and industry will have to vie for visitors’ attention with the attraction of a veritable city of fun-making devices. By invoking the aid of science and engineering as never before, ingenious designers have outdone themselves to create new thrills for excitement-seeking patrons, in a mile-long “Amusement Zone” that flanks the other exhibits of the exposition… At the opposite end of the amusement zone from the parachute tower, a “rocket ship” that never leaves the ground, takes 150 travelers at a time on an imaginary journey to the planet Venus. A hidden mechanism throws the passengers backward in their seats as if the ship were actually taking off, and motion pictures projected upon a circular “window” show the fair grounds dropping away. Blasts from air jets, movies of stars passing the window, and the constantly vibrating seats enhance the dramatic effect of the supposed trip through space. 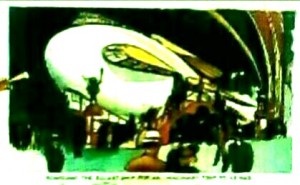 When the craft has “landed” a passenger alights from a door opposite the rocket ship’s entrance to find himself in a world of fantasy. Venus is portrayed as a planet still in primeval state, colonized by space-voyaging Martians and roamed by animals like the earth’s prehistoric mon- (continued on page 242)

sters. A pathway makes the circuit of the “Venutian jungle,” which sight-seers view through a “one-way” screen. This ingenious device preserves the illusion of reality by making spectators on the far side of the path invisible. At one point in the circuit, the rocket-ship visitors come to a “Martian headquarters.” Here weirdly costumed Martians and mechanically animated models of giant beasts enact episodes from the adventures of Flash Gordon, interplanetary traveler of fiction.

… And these are just a few high lights of a medley of attractions designed to suit every taste in entertainment. If fairy-book romance appeals to you, you can stroll through an “enchanted forest,” where the trees whisper to you as you pass. In case sheer speed is what gives you a kick, yo can spin so fast around the rim of a bowl in an electric powered train that your weight is tripled, your arms feel like lead if you try to raise them, and your feet seem glued to the floor! All the favorite thrillers of amusement partks, plus new ones like these, have been combined at the World’s Fair to make u one of the greatest collections of fun makers and spectacles that have ever been assembled in a single spot.