I’d like you to sponsor or do anything to assist this real Universe Rescue from this present system-attempt I’m stranded alone with. Here’s a summary of the above highlighted 15-page pdf, page 1 a summary I’d drafted in April, which reads:

I’d likely only heard about the “Revelation” prophecies because of some to-do over your logo in 1979-1980 news stories but I’ve wound up at the bottom of how its gotten sneaked-through and realize its bringing us to TOTAL PLANET EXTINCTION and am unable to find any way to get out of this situation but if I could it could conceivably rescue the Universe from gratuitous unending loss and sadism-misery and re-grain eternity for us humans.

After decades of this sneaky “Armageddon Program” invisible-warfare off of tiny me the unprobable-underworld system had me tricked out to Maryland where I got hit by a car, the alleged driver’s insurance company being Cincinnati Insurance, and I’m writing in hope that your company would request that that company would get some restitution to me because I’m the only one in the position to be trying to prevent the TOTAL PLANET EXTINCTION and I could quietly go to the library at Smith College to read and explain the papers of my predecessor as the “Armageddon Program” victim. Please review my whole blogsite at http://www.UniverseRescueKathyFoshayWordPressCom.WordPress.Com.

Page 2 gets right to that my finding is that the Revelation-Armageddon threat-promise prophecies came from someone with what I call Prehistoric-descended Autism-psychopathy with hallucinogen-dependence and that that had developed from an early people’s errant premature trek up and across Beringia in futile attempt to catch the sun before it seems to rise up off of the ground somewhere in the morning, that the early people had forced the way despite all nature’s attempts to keep them back and when they became snowed in up north newborns’ heads were probably laid down into the snow for sleep for too long and over the course of decades or centuries freeze burns through the skull had developed, deadening some areas, and then finally just recently I’ve noticed this Sylvian fissure part of the brain and I’m sure it’s a big scar. It’s also called the left-side lateral sulcus, and there’s a less-deep one on the right side. I figure that the freeze-burns had left essentially a hole of dead nerves primarily on the left side and that when the injury healed it had left that big scar, and that growth of black hair is the main obvious sign and symptom of the developmental injury, that we could get more-healed except that it’s a big hush-hush secret and the system they’d had built for themselves is going through with this Armageddon threat-promise rather than synthesize the new findings especially since the “space race.” (I’ll have to skip all this wordy stuff here for a bit.)

then tricked out to over the Maryland border where I was hit by a car, and then I’d received the following letter from Cincinnati Insurance, dated November 30, 2015 and January 28, 2016 but I didn’t receive them until that February: 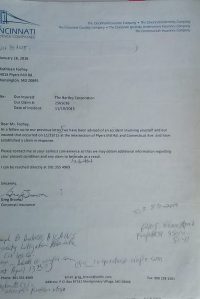 Now however Cincinnati Insurance sent me a copy of the police report and though it has my name on it it was a block north, and seems like a farce in that it said it was snowing, but it also said that the driver had had a different insurance company so I wrote to ask and Cincinnati Insurance just sent me this recently to explain/explain away that mix-up:

insert sabin’s picture, then into the prehistory, then the energy picture, autism picture? amazon picture?

sfn (= Society for Neuroscience, turned out to be right down the street from where I’d been stranded. I could try to make a better picture of the brochure.)

Then into that but I have a personal addition difficulty in that I appear to have been born into a Bronx Zoo-area “fraud-family” that was turned into some dynasty of slaves of slaves for performing-out to make this Revelation and its Armageddon possible, that will result in the evetual TPE, and that’s connected to the car-hit and then to that now I’m here surrounded by all kinds of these system-made and orc-like “science creations.”

— Really I have to find some sort of a nice way to take photos of these illustrations I use, surprised that they aren’t in the media library here. I have to take those photos and send them to here. I sent a long typed email last night about this latest realization-set i’m all alone with and it is really bad, all about oil connections lately i’ve been noticing, that that Vajiravudh Rama VI had donated alot of ejaculation toward this Armageddon or however it’s termed by the different interests, and there are lots of the great-grandkiddies from him all over the place and around here around me and everyone else too. Vajiuravudh was some warrior type but so was the rest of that phony-royalty business and specifically there in Siam, where somehow it’d escaped my notice that JD Rockefeller, b. 1839 near Auburn Prison and the Erie Canal in New York, does look like that “The King and I” king, Mongkut, posthumously dubbed Rama IV. Then Rama V looks descended from Peter Paul Rubens who I try to explain’s people must have been (as captives) deluded into believing that the innocent-appearing little-sized Autist people were multi-wronged by the “others,” the normal Old World peoples who’d been invaded by the Autists from their long-lost time in Paleo-America, so that they’d become like “promises” champions to the little-sized people, in fact, the situation that I’m guessing the Bells had had, as with then that earlier David and Goliath business, etc. P&G isn’t going to be interested in alot of this and it’s taking me so long to get to every piece or step of what I have to do in the process of existence-support till I can sit down and write for assistance, etc. I’m going to try to work on the media library here not as a waste of time but for something relatively relaxing, maybe. I’d like to try calling up pictures and taking a photograph with the cell phone but really I’ve got not only the “Merchant of Venice” always watching anything i do for excuse to criticize normal Americans by, but also this “fraud-parent”/Vajiravudh stereotype especially in this library and now it’s seeming like they have a regular spot across the street —  but the email i sent on all of this last night didn’t arrive.

7/20, I haven’t gotten anywhere with this, just one difficulty after another. Tourist season, Season on Tourists. (2017)