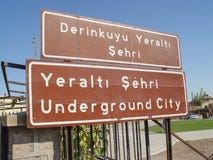 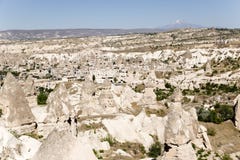 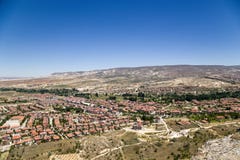 The cutaway map above shows part of the underground city of Derinkuyu as it would have appeared at its peak during the Byzantine era.

The city is the largest of of over 200 underground cities discovered so far in Cappadocia, Turkey.

The city itself extended to a depth of 60m (200 ft) and is believed to have sheltered up to 20,000 people, along with livestock and additional food stores.

Amazingly, the tunnels were only fully abandoned in 1923, when the Christian inhabitants of Turkey were forcibly exchanged with Muslims living in Greece.

The tunnels were then only rediscovered in 1963, and opened to tourists in 1969, with around half the city currently accessible to the public (see nearby hotels).

Reddit user wildeastmofo, who posted the map, elaborates that the:

Caves may have been built initially in the soft volcanic rock of the Cappadocia region by the Phrygians, an Indo-European people, in the 8th–7th centuries B.C., according to the Turkish Department of Culture.

When the Phrygian language died out in Roman times, replaced with its close relative, the Greek language, the inhabitants, now Christian, expanded their underground caverns adding the chapels and Greek inscriptions.

The city at Derinkuyu was fully formed in the Byzantine era, when it was heavily used as protection from Muslim Arabs during the Arab–Byzantine wars (780-1180).

It was at this time that most of the chapels and Greek inscriptions were added. The city was connected with other underground cities through miles of tunnels.

Some artefacts discovered in these underground settlements belong to the Middle Byzantine Period, between the 5th and the 10th centuries A.D.

These cities continued to be used by the Christian natives as protection from the Mongolian incursions of Timur in the 14th century.

After the region fell to the Ottomans, the cities were used as refuges from the Turkish Muslim rulers. As late as the 20th century the locals, called Cappadocian Greeks, were still using the underground cities to escape periodic waves of Ottoman persecution.

R. M. Dawkins, a Cambridge linguist who conducted research on the Cappodocian Greek natives in the area from 1909-1911, recorded that in 1909, “when the news came of the recent massacres at Adana, a great part of the population at Axo took refuge in these underground chambers, and for some nights did not venture to sleep above ground.”

When the Christian inhabitants of the region were expelled in 1923 in the population exchange between Greece and Turkey the tunnels were abandoned.

The tunnels were rediscovered in 1963, after a resident of the area found a mysterious room behind a wall in his home. Further digging revealed access to the tunnel network.

The city could accommodate as many as 20,000 people and had all the usual amenities found in other underground complexes across Cappadocia, such as wine and oil presses, stables, cellars, storage rooms, refectories, and chapels.

Unique to the Derinkuyu complex and located on the second floor is a spacious room with a barrel vaulted ceiling. It has been reported that this room was used as a religious school and the rooms to the left were studies.

Between the third and fourth levels is a vertical staircase. This passageway leads to a cruciform church on the lowest (fifth) level.

The large 55 m (180 foot) ventilation shaft appears to have been used as a well. The shaft also provided water to both the villagers above and, if the outside world was not accessible, to those in hiding.

And, if you’re wondering about how they got rid of all human waste 20,000 would produce, the answer is that they stored it in pots and then dumped it on the surface whenever they could.

— back to me, UniverseRescue -attempt, that that’s what the book I’d come here looking about seemed to have been based on, the rise of the explosives industry off of “saltpeter” that forms on dried waste, but I’d thought it would be easy to find here and I’m not sure if I’d even scratched the title, author or call number down, just that it’s the big subject since noticing the Hahnemann Memorial/Monument’s back side, that I didn’t take any photos of, because it’s like only a vague affected impression one might get, isn’t made clear. This system is so difficult to trace.

I think there’s a connection from the Jomon to Cappadocia to this guy pictured here to the “chemistry” of making things, especially gunpowder, from the dried excrement say as at Cappadocia that they got rid of outside, to all the underground and nuclear then business. It’s so slow for me to do things now because of the weather change though and I’d made a huge effort to get here to see this book and I can’t find any sign that it’s a book from this branch or maybe even that it exists, a big setback for me. I don’t know what’s wrong with them but they do this Armageddon world-takeover off of tiny me and thereby I’m aware that there isn’t any future in this direction we’re in, it’s only difficult for me to “corral” all the various points and then lay them out in a succinct way so that this is made “easy to understand” as though that would assist. They, along with who- and however,” learned to fertilize ovae outside of bodies and “grow” people and they work on a nepotism-world basis and ignore people not in that system. I don’t know if they maybe despise “nature God” or what the deal is. I have to start scurrying back to catch the bus to catch the bus to back to the shelter and hope no new difficulties arise. -30-

— add that this “Armageddon Show/Program” started in Brooklyn, Coney Island. add that people can’t really have children that are really their own (anyway) because the autists have anything that’s nice destroyed (steal babies and bash their heads in still one way or another.) add about all that desertification, add the Botany bit again, the beach “bully” example, fritz haber, ck chabad-lub, relation of Charles the bold line and the g. altarpiece.

i’ll just put this here, not any other pieces on this subject yet.

I don’t know if these weren’t just underground-diggers that didn’t need t make brick-factories with the dirt so that they’d just left it sitting there. Perhaps it’s the syndrome from Cappadoccia in Turkey.