Someone Started a Joke

I got Andy and his older brother Maurice mixed up and will get back to straighten out this soon, that it was Maurice, also passed now, who had sung the song, “I Started a Joke” that I keep coming back to as seeming to be from these “Jomon” perhaps. 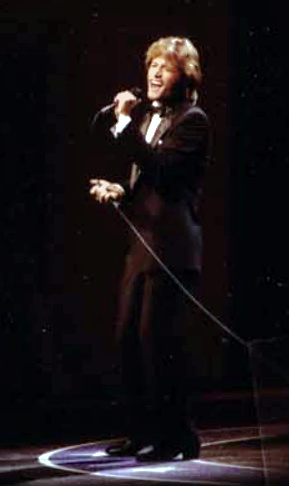 Andy Gibb, 21 March 1981, by William Fitz-Patrick, (1946- )Photograph C1299-9A, White House Photographic Office: 1981-89 Collection (see large PDF with description and link to photo contact sheet here). From the The Ronald Reagan Presidential Library and Museum. This image is a work of an employee of the Executive Office of the President of the United States, taken or made as part of that person’s official duties. As a work of the U.S. federal government, the image is in the public domain. Creative Commons.– This is temporarily-rigged till I can figure a better way to do it. I’m putting it here to go with the song “I Started a Joke” because I’ve been seeing alot of this what I think could be called a or the “David” stereotype all around me, mostly females that seem to have this facial structure, maybe “come from” Mrs. Alexander Graham Bell, Mabel Bell.

The Bee Gees related that they’d been in a small airplane and kept hearing that tune like from the plane’s engine/s and they sat down to try to put words to the tune and came up with that enigmatic song that doesn’t say what the joke is but is so about all life and death that you’d like to hear what they’re talking about, Andy being the one that mainly sings the song. That started the whole world crying, and then into that horrible bit where the person finally died, so I’ve been thinking that it sort of goes with this “magic” that I’ve Armageddon-got all over me, like the tune and sentiment is perhaps from that “Man In Oriental Costume” -type of a source, and maybe the joke is: any number of different things it could be, that have to do with impostoring God or insisting that the cannibalism is necessary for feeding some monster type, as with the Shanghai-area’s “Laughing Buddha,” Maitreya, or about the entire space venture, that maybe the sentiment of the song comes from the moon-landing time, and I keep losing track of the dates to this and that and everything, that I’ll have to try to check my notes or on the Internet again exactly when the Bee Gees brothers had first written the song. Andy’d passed in 1988 I think at a very young age, barely 30.

I’m trying to put this icon somewhere to use it for whenever I get back to that old BeeGees I Started a Joke song, on their “Idea” album, a lightbulb in the cover art.) 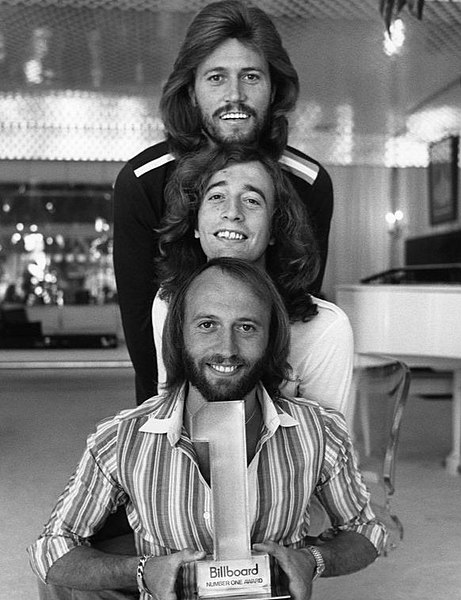 Publicity photo of the Bee Gees for the television special Billboard #1 Music Awards. Top to the bottom: Barry, Robin and Maurice, 18 November 1977. This work is in the public domain in the United States because it was published in the United States between 1923 and 1977 without a copyright notice. See Commons:Hirtle chart for further explanation. Note that it may still be copyrighted in jurisdictions that do not apply the rule of the shorter term for US works (depending on the date of the author’s death), such as Canada (50 p.m.a.), Mainland China (50 p.m.a., not Hong Kong or Macao), Germany (70 p.m.a.), Mexico (100 p.m.a.), Switzerland (70 p.m.a.), and other countries with individual treaties.

Maurice, 1949-2003, who I think I’d seen on the YouTube singing that, “I Started a Joke” 1968 song and mistook for his younger brother Andy, is on the bottom. I guess he’d been the main singer of the song. They’d written it to an airplane’s motor’s hum-tune, felt that that’s what they’d been hearing. I’m putting his picture, same as when I’d thought it was the younger Andy Gibb, because my thought is that the song came from the “Jomon ‘magicians,'” that maybe they were realizing they’d been all mistaken about the entire physical nature of space that they’d built this system on the assumption of, that there’d be riches and other places and peoples out there. I’m muddling through all this.

Another point is that I’d been subjected to hearing that and all the other songs over and over all around in public and therefore the words that have been being sung have some public domainness about them in order to discuss that which has been going into our ears and brains. Someone started a joke that had the whole world laughing. The Christ story, Jesus Christ? His mother? It could have been anything but now we can see that that Bible’s last book really has us headed for extinction is what I’m saddled alone with trying to get assistance away from that’s happening. Then it goes that he’d finally died and that started the whole world living. For years I’ve been thinking-saying that things can be worked out, let me function, the death/extinction of the mistake-makers isn’t necessary. Add to that the main thing is that they’re the “narcotic-addicts,” the brain-eating believers and the narcotic rules whatever else their decision-making processes might be, that for “I finally died, which started the whole world living” self-drama they would still sit doing the “magic” till there’s no planet left, wouldn’t actually go through with any abdication, as this “Armageddon Program” gimmicks on that someday there might be some release of myself and voila voila that’s the world “saved” just like that, and they’re not going to let go, they’re addicts and I’m the gimmick they’ve been able to be keeping this charade-system going by, etc. I just wanted to put up a picture of the dramatic singing to this song and way it was inspired and I’ll have to take younger Andy’s photo down but that’s how Maurice had seemed to look over the cellphone of YouTube when I’d first started thinking on trying to describe this. Also there’s the lines that he’d looked up at the sky, running his hands over his eyes, and I’m guessing that that’s a pun on “ayes,” on people who’d agreed with the space beliefs, their Autist boyfriends since way way back, what the whole system is founded on, the Jomon championing the Autists. Maybe the Jomon are the Autists, but I think there was some original difference, though now it seems nearly moot.