The Catch in the Rye

dextersinister dot org/MEDIA/PDF/GuileWeaver dot pdf = this is a report on pseudonymic or anonymous writing JD Salinger had likely done and I think that that “Planet Trillaphon” piece is either underground-dictated by him or one of his numerous  offspring-descendant donations to this cannibalism-based brain-eaters’ global-system, am having to check on this now. 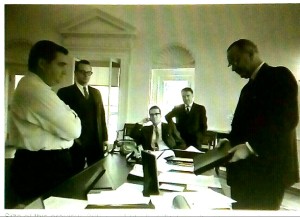 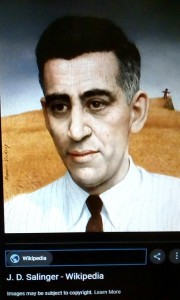 Detail of the Rbt. Vickrey portrait of JD Salinger

I haven’t any idea why this appears to be out of place in the viewing but not the editing mode.

There’s more. In looking into this painter of the Etretat cliff, across that bay from the D-Day landings that included Salinger carrying his typewriter ashore it’s said, by Gustave Corbet, (Gustave Courbet 1819 Fr.-1877 Sw.,) I came across this portrait of Courbet’s dealer (that’s what they call the art dealers informally,) whose portrait is in the link, and I’m thinking that perhaps he was tall like Herzl and Salinger, and this is throwing off my trying to get assistance for myself as usual, that I’d like to keep trying to find out about this Hendrik Jan van Wisselingh, 1816-1884. The portrait was purchased by the Kimbell Art Museum in Fort Worth in 1984. Right now I’ve got it left big where the email-sends first arrive till they’re moved into place somewhere, which would be here but it looks okay where it is for this time being and my uber-point is that the Autists were always cliff-pushers, that’s where ‘most everybody went, tricked up to cliffs and “disappeared,” where all the Europeans and probably the Asian residents had gone as this world-takeover scam has wound up being done off of me increasingly over the last 6 decades now and I’m trying to explain the human race’s way out of this necessitated extinction because if for not any other reason that the boys are parasites and parasites eventually destroy till there’s nothing left and then they go too. “Rye” is the source of ergot mold. It’s seeming like Dr. (Albert) Hofmann had claimed he’d made LSD from ergot because the system was covering up its longtime use of it as a murder-poison but I think their interest in it had originally been that they could get high off of it, as feral prehistorics with the Bad Thing making all their cells wretch, jonesing without their New World drugs when they got to and invaded the Old World, the drugs were less strong in the Old World, were milder types, maybe like cannabis isn’t like LSD, which is really from

— That was meant to be a reference to the DFW style. —

Original Ghent A. Just Judges panel, photographed prior to the theft in April 1934.

Detail of the original Ghent Just Judges panel, photographed before theft in April 1934.

Now they’re terrorizing me with this thing as I took another look at the Wikipedia file’s image and it’s looking different and I went to send a copy of how it looks different and the system’s withholding that email from reaching here, and then that botches up my completion of anything is how that works, so that maybe in 6 months from now I’ll try to look at this again and will have to start over nearly from scratch. 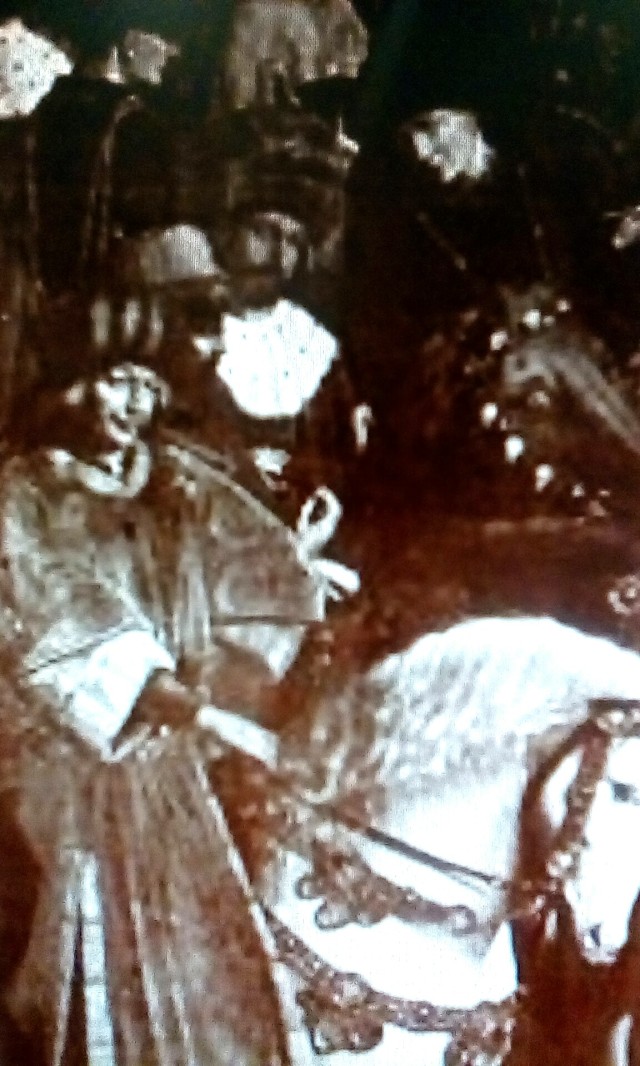 Detail of the original Ghent Just Judges panel, photographed before theft in April 1934.

I give up. I didn’t find any citation on where this seemingly-only pre-theft photograph of the famous set had come from. I think the piece was stolen because it reflects the relationship between “little Adolf” and d. 1904 at age 44 Theodore Herzl and Hitler had become famous and it was possible someone might recognize that the 2 types were a duo. I say Herzl didn’t die young like that, he was healthy, that he’d just gone underground to do this “‘magic’ show” of then the WWI, that little Adolf had participated in up around Verdun, that I’d be trying to get maps to show where that is in relation to Cherbourg, is what I’m supposed to do next but instead I’d be busy trying to re-send this “catching” them in playing a photography-trick where the 2 dark enlargements look different from each other, this one, which I could make bigger but I was just going to put them side by side, looks like the guy is holding a red flower like a rose or chrysantheum (sp.) and that the guy in the ermine has a beard. In my taking a second look at it it looks like his fingers are just Italian-style talking to someone and that his hat has a wide brim that only looks like it’s the other guy’s mustache and beard. [It arrived late.] — 20 August, 2019, there isn’t any link between 19-year old Adolf’s time in Verdun and JD Salinger’s D-Day arrival on the northern coast, I’d thought Verdun was up north but it’s up north in correlation to that he’d enlisted from Munich. Verdun is on the route to Paris from central Germany, through Metz to Paris. I figure Herzl was under wherever Hitler was working-up this “‘magic’ seeing,” the visions and voices “signals” communications and grooming Adolf along. But that doesn’t seem to have anything yet to do with Salinger’s going to Cherbourg. I put the photo of Pierre Salinger because I figure his name was trick-involved as history kept rolling along.

[from previously] … I’m thinking that the ergot was used as a poison and our brains re-live the affliction by those measles and then the chicken pox type illnesses, and all that’s kept covered up by the psychoto-psychopathic Autists, watching everything as they hunt anything that moves. They thought they’d find new hunting grounds aplenty in space but everything’s the opposite of what they think, they’d purposely killed all the spirits who’d been meant to go out and inhabit space, had them sucked up with vacuum cleaners. The “Catcher in the Rye” ends, Don’t ever tell anybody anything. If you do, you start missing everybody. — I’d heard that Lennon had been shot because he wanted to tell some truths, but then also Salinger’s type seems to have some creed where in order to eat you have to provide food by fertilizing ova under the ground to be grown into being food. That goes around back to that Mr. Film character from DFW’s “Planet Trillaphon.” Salinger lived up the Connecticut River from the Five Colleges area where Amherst is, making donations of fertilizer I’m sure. It’s likely one of those that had written “Planet Trillaphon.” They’re underground people that’s all a big secret especially from me, where I’m the butt of ignorance-jokes, but this “Armageddon Show” had started off in 1993 with threatening me to write for a character, make up things attributed to someone else and I don’t do creative writing and didn’t take any of it seriously till I’m reading this Planet Trillaphon and it’s possible that DFW was forced to transcribe for the underground and anonymous invisibles, to be a “ghost writer,” as the biography about him is titled Every Love Story is a Ghost Story and I can’t figure how that has any much connection as a title to the guy’s biography, except that maybe he’d been a forced-transcriber like this Armageddon Show had tried to get me to make up things as though they were said by someone else. Write a nice poem and put it in her name. What would she like to write about, Just anything, write away, would be an example though not a specific to my situation example. In my situation it would be like me surrounded by a bunch of invisible cartoon-like “spirits” and some of them say things and I write them down and then someone says now make up something for the pretty Miss Queen Julie character and I say Like what and they say Just anything, and I don’t know how to do that so I’ve been being tortured ever since sort of a scam this is. They’ve just gone around the world with this “visions and voices” trick-set and won’t do anything useful, etc. The Planet Trillaphon story is so ill, and now I’m looking at the Catcher in the Rye and thinking that there are alot of similarities. Salinger purportedly landed on D-Day with his typewriter and worked on this Catcher in the Rye throughout his part of WWII, etc., but also there’s this point I’m trying to get across that, if you notice that he and Herzl, the father or founder or prime-mover for that state.

Wisselingh; the British Museum says he was born in Haarlem and: Firm of Dutch art dealers (still surviving) founded 1838 when Hendrik Jan van Wisselingh took over the firm of Johannes Immerzeel. Great development into print publishing under Elbert van Wisselingh in 1880s. 1892 opened the Dutch Gallery in London with many exhibitions of contemporary printmakers. Archive survives complete from 1892.

Alamy has a portrait blurbed like this: Portrait of the Art Dealer Wisselingh. Artist: Charles Haslewood Shannon (British, Lincolnshire 1863-1937 Richmond); Sitter: Elbert Jan van W. 1848-1912 — okay, that’s his son or inheritor of the business; the famous one for further building it up. Charles Haslewood Shannon painted or drew it (chalk on pink paper) EJ made the Dutch Gallery in London in 1892 w chas de sousy ricketts

I ran out of time for another day again now. I returned the first edition of the Signifying Rappers yesterday and tried to reach someone but the bums disappeared my cellphone email that actually described everything up to this salinger business plus my own situation in just one fairly long but not too bad paragraph, maybe 350 words or less, and it just vanished off the cellphone when I called it up to make a little correction in preparation for sending it when I got to the library, etc. Time’s up and I’ll try to search-engine a little more on the elder Wisselingh. The younger has the more angled cheekbones.

18 August, Sunday, I don’t have time to try to look into Wisselingh today, and will have to move it down to the 4th post soon too.

I'm all alone with the real end of the world and always looking for assistance and no one's ever contacted me from the hundreds of letters I'd sent while at the big homeless shelter, 2nd and D Streets, NW, as though anyone that tries to contact me gets disappeared, my life used as a LURE-gimmick that goes to how that Armageddon prophecy in that book of Revelation has been being snuck-through, and this is sort of the bottom of the barrel of ideas for trying to find assistance, thinking I could get all my various writings on this in one place that letter-recipients could then look up if they're interested. That means I'd have to see if I can send my emails to here, how to do that. Wordpress said there is a way but it entails that spam would also get the email address. My time for now it up I guess. Working in this sitting position isn't healthy for me but I've always got to be doing something toward trying to get hold of someone to help me. It's like I'm a microcosm of the Earth or the human race and if someone could help me out of this torture then that'd be a start on trying to get the whole Earth out of this. 5/1/17, still all this, etc., same situation. (7/14/18 now....) Now it's 2019.
View all posts by kathyfoshay →
This entry was posted in Communication attempt, WARNING/S. Bookmark the permalink.